Five Maasai men walked on to the platform at the Hamilton, New Jersey Train Station. Instinctively, Phyllis Eckelmeyer walked over to them, because her daughter was leaving the next week to spend a year teaching in Kenya. She reached out her hand and said,  “Hello, do you speak English?” The Maasai were traveling to New York City to participate in the 2004 United Nations Permanent Forum on Indigenous Issues. They were an indigenous tribe of hundreds from across the globe traveling to the UN for this Forum.

The Forum as described in the UN’s 2005 archives’ focus was to “… deal with indigenous issues related to economic and social development, culture, the environment, education, health and human rights.”

Sharing the train to New York with the Maasai, Eckelmeyer heard how their lives were negatively impacted due to diseased-laden water. They said their two-minute speech before the UN would speak to the need for potable disease-free  water. After her return to Bucks County Eckelmeyer vowed– “I want to raise $30,000 to drill a well that’ll bring water to this Maasai village.” 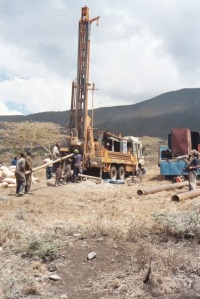 To document the drilling of this first well, in December 2005 Frog Pond and MCEP traveled to Kenya with a film crew. The well was named “Christy’s Well” after the anonymous donor. A Philadelphia film company–Shooters Post and Transfer–volunteered the crew and editing talents that ultimately produced a half-hour documentary titled QUENCH. The initial screening of QUENCH would take place in October 2014 at Delaware Valley University in Doylestown, Pennsylvania.

Since 2005 and every year afterwards, at least two Maasai have traveled to Bucks County. They spoke in thousands of schools, houses of worship and professional organizations about their culture and heritage. Their message resulted in annual sponsorships to over 100 Maasai children in primary or secondary schools and colleges. More  importantly  donations came in for water projects. There are now seven wells sited across this village that encompasses an area the size of Bucks County.

Maasai herders and women pay a small fee of a few shillings for the water they draw from the wells. Designated Maasai men are responsible for maintaining the wells, collecting fees, and ensuring that diesel fuel is available to keep the pumps operational. Pipelines snake away from the wells to strategically placed cisterns so that women walk less than two miles to fetch potable disease-free water. MCEP’s primary goal is for ten wells to be sited across their village. We are determined to secure funding for the final three wells.

Since 2005 women have also come into their own. Last March and April 2015, I posted  six blogs about Maasai women and their journey toward lives as independent business owners. Two are pictured below with Phyllis, taken when in 2015 I traveled to Kenya with Phyllis and Education Coordinator Alice Sparks. We toured well sites, schools and spent enjoyable hours with our Maasai friends, delighting over the positive changes since our visits a few years ago. 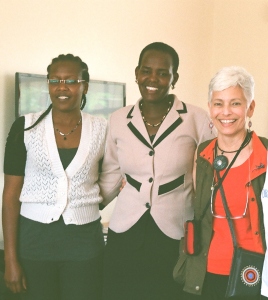 These changes are also bringing progress (some good, some not so good) to the Maasai village. A safe house is sheltering and educating over 100 young girls who had fled from early arranged marriages or female genital mutilation (FGM is banned in Kenya). The Kenyan government is constructing a vocational school where village boys and girls can enroll to gain income earning skills. Giant transmission towers are planted across Maasailand as they march from Nairobi toward Mombasa on the shores of the Indian Ocean. Oil has been discovered offshore from Mombasa and this infrastructure will bring a cultural crises to the Maasai community.

The wells have brought land speculators to Olosho oibor who wave small amounts of cash in front of landowners in attempts to persuade them to sell their land. SIMOO is pushing back against the speculators by cautioning their tribal members the consequences of selling their land: How it would lead to the extinction of their ancient culture and heritage. Although we noticed  contemporary homes under construction we also spotted hand-painted signs declaring properties Not For Sale. 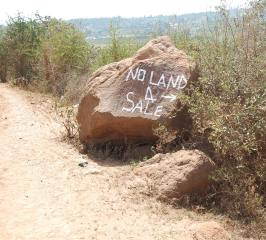 Land speculators invading Maasailand. One of several  “no sale” signs we saw during our tour.

“A drought is decimating the Maasai community … “

Climate change has created a drought that is decimating the Maasai community as well as many other parts of Africa. I wrote about it’s effect on the Maasai in my February 17, 2017 post, “Climate Change is real”. Shortages of food are so prevalent that the Massai have forsaken their valued herds in favor to feed their most vulnerable: the elderly and the young. MCEP recently wired funds so SIMOO could set up a food security program.

The Maasai word for “Luck” is Namunyak (Na-men-YAK). “Luck” can sometimes move beyond one positive gesture. The Maasai decreed that Eckelmeyer be given the name “Namunyak” to honor how a handshake between strangers transformed their village. I get goosebumps looking back at the many gifts that have come to the Maasai since her 2004 greeting on that Hamilton New Jersey train platform. The gift I cherish the most is the empathy and curious energy always expressed by youngsters in classrooms and assemblies after listening to our Maasai friends.

On Friday April 7, Phyllis Eckelmeyer will receive the Central Bucks Chamber of Commerce Lifetime Achievement Award for her Humanitarian efforts.

Phyllis, John Sakuda and Alice Sparks taken at our 2015 Fact Finding Tour. John was our rock star on visits to schools in 2011 and 2012 while living in America. He is now back in Kenya caring for his family and cattle.