A few years ago on a bright summer afternoon, I step out onto our porch and gaze beyond our back yard to the Doylestown Community Garden. The garden bumps on the other side of our property. A macadam hike and bike path separates us from this gentle piece of public ground in Doylestown. The garden shares an expanse of grass including a fenced area protecting twenty plots where Doylestown Borough residents prepare, plant and harvest to their heart’s desire. Every season we receive gifts of joy and hope from our porch as we witness community gardeners tilling the soil in their beds.

On a separate piece of ground is an herb garden lined on one side with one apple and two pear trees. The apple tree, possibly 20 years old and 10″ in diameter at its trunk, stands closest to the hike and bike path. On this day the apple tree catches my eye because swirling above its crown in a perfect magical 360 degree formation are hundreds of dots.

I walk down our lawn and cross into the community garden where at this close range I suspect:  These Dots May Be Bees! Hundreds upon hundreds of them continue to swirl downward, still in precision formation before diving and disappearing inside the tree’s branches and foliage. I telephone the Penn State Extension Bucks County Office and ask for Agent Scott Guiser who in his free time is a beekeeper, harvesting honey at his home.

When Scott arrives there are few bees diving into the heart of the tree. Midway up the tree trunk, wrapped in a thick knot we discover the bees in the formation of a hive. The bees are tightly tucked in the crotch leading from the main trunk. Scott confirms that this is a swarm of honey bees and adds, “I’ll have to get my gear. I’ll need a ladder and a tarp or large blanket to spread under the tree. I won’t be long.” Before leaving he tells me that somewhere in that thick clump of bees is the Queen.

The tarp is in place when Scott returns.  He slips into his white protective suit and hood transforming himself into an Earthly Astronaut.

The smoker–a metal container shaped like a coffee pot with an extended spout is lit, spitting puffs of smoke. His most important gear is the hive, a box which he sets on the tarp at the base of the apple tree.  “I have to find the Queen”. He removes a frame from the box. It has traces of hive odors which will attract the swarm of bees and will help them adapt after entering the hive. Scott climbs the ladder and with one puff, the bees hugging the trunk slowly fall to the tarp below. When he locates the Queen in the trunk, he gathers her and the remaining bees onto his bee brush. Very carefully he climbs down the ladder and stooping next to the little box, gently shakes the Queen and the other bees off his brush onto the tarp. Once the Queen is inside, the rest follow like soldiers.

It’s hypnotic witnessing these beings Move As One. I stoop closer realizing that just beyond my back yard an entirely Alternate Universe has dropped from the sky. I have no fear being inches away from these Bees and am tempted to drop my hand on the tarp hoping they will rest on my palm before entering the hive.

A few months later, Scott gifts me with a jar of honey harvested from the “community garden bees”. Those bees are and will always be part of my soul.

A neighbor who lives on my street also keeps bees. Last fall I run into him and share the story about the bees in the community garden. He is convinced that this swarm was from his hive, pleased to learn that they were rescued by another beekeeper.

Next– my review of the book The Bees by the British writer Laline Paull.

It was 2007 when a worker, mowing the grass on the grounds of the Middletown Grange located in Wrightstown, Pennsylvania, discovered a gray stone nestled at the bottom of a slope near a trickling stream. Imbedded in the stone was a small brass plaque with the words:

In Memory of Our 4-H Friend, BUTCH

After many inquiries by the Grange to the Bucks County 4-H, it was learned that Lt. Geary who resided in neighboring Montgomery County was a member of the Bucks County 4-H Club.  His projects included raising goats and rabbits, mentoring younger 4-H youth and working at farms near his family’s home in Penns Park, not far from the Grange Fairgrounds. After his former 4-H members learned of his death in Vietnam, they arranged for the bronze plaque to be imbedded in the stone. There they had gathered at that quiet site to pay homage to their friend.

The Grange then decided that the stone should be moved from its setting and placed in a conspicuous site that would be more visible to the public. The Penn State Extension Office of Bucks County was contacted again and asked to designate a 4-H Club to take on the project of building a memorial garden for Lt. Geary. It was a given then that the 4-H Goat and Sheep Clubs would enthusiastically take on this task. Because a Penn State Master Gardener was also required to oversee the project, as a Master Gardener I jumped at the opportunity. Having researched and published articles about Vietnam about the eight nurses who died during the war as well as subsequent pieces about men and women veterans, the project became a personal duty of honor for me.

On August 13, 2008, at the opening ceremony of the annual Middletown Grange Fair held in Wrightstown Pennsylvania, the memorial was dedicated to 2nd Lt. William S. Geary, killed on April 5, 1969 in Da Nang Vietnam. Over two hundred fair goers including 4-H club members, veterans and the Geary family were in attendance. Butch’s best friend in high school, Steven Daniels the Chief of Buckingham Police as the Keynote Speaker gave a moving tribute to his “… best friend” and had kept up a correspondence with Butch after he had joined the military.

As there’s a story behind every name etched on the Wall, Lt. Geary–known as Butch by his former 4-H brothers and sisters–graduated from Council Rock High School in 1963 and entered Temple University on a Senatorial Scholarship. His leadership qualities that were honed during his 4-H years came to fruition at Temple. He was vice-president of the Young Democrats, president of The Newman Club and a member of the Men’s Chorus. He was studying law but after his 1968 graduation and with the escalating war in Vietnam, he joined the U.S. Marine Corps.

A Platoon Commander with the First Marine Division, it was on April 5, 1969 when his unit, part of a battalion operation south of Da Nang came under heavy gunfire. It was during a maneuver of his troops away from U.S. air support that he was mortally wounded by sniper fire. Lt. Geary was awarded the Bronze Star, the Purple Heart, the Order of Valor and the Gallantry Award. 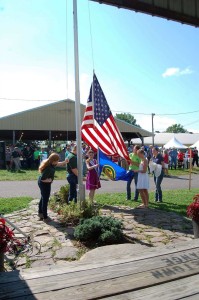 His mother, Polly Geary offered the flag that had draped her son’s coffin at his burial to be raised at this first memorial ceremony. She then donated his flag to the Middletown Grange which each year since 2008, those stars and stripes have been a part of the opening ceremony at the Fair.

On your next visit to the Wall, be sure to seek Panel 27 West, Line 17 and reach out and touch Butch Geary to honor his sacrifice.

On this Veterans’ Day, thank a Veteran for his or her service.