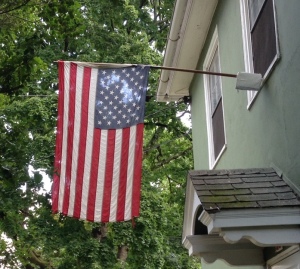 America is in “Distress”

My images from June 30, 2018 Rise Up Doylestown Rally for Immigration Reform held at Bucks County Court House in Doylestown PA

On every Memorial Day, July 4th, Labor Day and Veterans Day, my father displayed the American flag from the second floor window of our home. He was too young for WWI and too old for WWII. Daddy kept the home fires burning while two of his brothers raised their hands to wear the Army uniform in the “War to end all wars”. By flying the flag on those four commemorative days, he honored his brothers and his father, a Civil War veteran who died when Daddy was barely 3 months old.

The pole with its attached American flag is stored in a corner of my bedroom. I grab the pole and spread the flag across my bed, pleased the three colors remain as strong as the day it arrived in my mailbox—a Thank You for supporting programs of the USO. But this July 4 is different. How can I continue this ritual originated by my father? Will communities across America rise up to protect our Democracy? 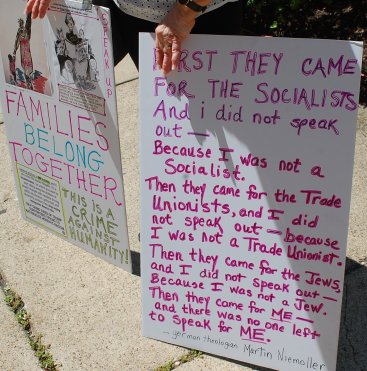 July opened with a mammoth increase in the Trump administration’s zero tolerance policy,  first announced in April by Attorney General Jefferson Beauregard Sessions. Following the AG’s order, the U.S. Border Patrol– affiliated with the Department of Homeland Security–stepped up its aggressive separation of children from parents or their adult relatives. What began in 2017 as open animosity toward Blacks and Muslims has now spread to the Latino community. What group of Americans will be targeted next because they “infest” America?

Instead of mounting the USO flag on the pole, it will be replaced with the flag that covered the coffin of our Uncle Charles—one of the two brothers who served in the Army. History has chronicled the uncivilized treatment of Blacks who wore Army uniforms during WWI. My uncle served a mere 41 days before his discharge a month after the November 11, 1918 armistice ended the war. Hospitalized some months later he ultimately was transferred to a VA Hospital where he remained until his death in 1965. I’ve often wondered: What happened during that blip of days my uncle served before his discharge? What cause or causes led to his eventual 25-year confinement inside a VA hospital?

Just some of the questions rolling around my mind. After digging through our family history I hope to share my results in a future post on The Bucks Underground Railroad. For now, America is in Distress and my uncle’s American flag  will be mounted on the pole. . . . . . . . . . . . . .  Backward. 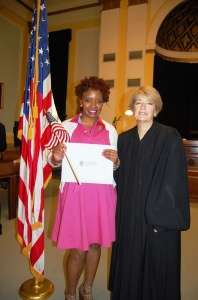 On Friday June 17, 2016 I attended my first Naturalization ceremony inside the Lancaster County Court House. Along with my colleagues from the Maasai Cultural Exchange Project (MCEP) we witnessed the naturalization of Esther Lemaiyan, a Maasai from Kenya, East Africa. Esther first traveled to America in 2003 while working for Simba Maasai Outreach Organization (SIMOO), the NGO in Kenya that partners with MCEP.

Joining us was Esther’s sister Mildred, who had arrived in Lancaster last year. Mildred has begun her naturalization path toward American citizenship and is currently attending Harrisburg Area Community College (HACC) as she studies for her RN degree. We were seven people of nearly a hundred others who traveled to the Court House to witness the naturalization ceremony of family members or friends. Although we were on time, it was nearly an hour before we were able to enter the court room and be seated. We learned afterwards that this wait occurred because the documents of each candidate had to be verified before the ceremony could begin.

It is an impressive room we are in: a high ceiling with portraits of former judges displayed on all the walls. There was a center aisle separating the spectators from the 50 candidates for citizenship–people of varying shades of skin and ages from 26 previous countries. Lancaster County Common Pleas Court Judge Leslie Gorbey was seated at her bench; below her at the attorney tables were several staff from the Prothonotary Office. Standing at a dais facing us was RoseMarie S. Sallemi, Naturalization Officer from the U.S. Citizenship and Immigration Services Office of Homeland Security. She welcomed everyone and described how the ceremony would proceed.

Asking the candidates to repeat after her, Judge Gorbey read The Naturalization Oath of Allegiance to United States of America. That was followed by everyone standing to recite the Pledge of Allegiance. Taking our seats, we were privileged to hear the Judge’s remarks to our newest citizens. I can only describe her words as a lullaby singing praises of “…the promise of equality, opportunity, freedom of speech, and liberty”.  Sharing that she is the child of immigrants, she spoke of the Love of country and patriotism …”the feeling of pride … and the renewed appreciation of what this country means.”

The Judge  encouraged the new citizens to register and vote because “… this presidential election gives you a front row seat for some interesting times.”  She reminded them that “The United States is complex –it may be bigoted or shallow but opens its arms to allow you to express your ideas.”  The Judge added, “Don’t reject your heritage because it is part of you and enriches the rest of us to no end. You have traveled here from many lands for the Freedom to worship and to speak without the threat of imprisonment.”

Judge Gorbey’s message had sewn a powerful thread into the fabric of these 50 new Americans. Stepping down from the bench she, along with a representative from the Prothonotary Office presented the Naturalization Certificates to each of the new citizens.

Mildred Timando takes a selfie with her sister, Esther Lemaiyan

In 2004 Esther attended the UN’s Permanent Forum on Indigenous Issues as one of the representatives from SIMOO. With hope for a better future and being able to support her family back home, she thought of pursuing her education. She was hosted by Maasai friends in New Jersey and in 2005 enrolled at Mercer County Community College where she received an Associate’s Degree in International Studies.

In 2010 Esther settled in Lancaster, PA where she continued her studies, eventually receiving her LPN from Chester County Practical Nursing Program. She’s currently working towards her RN at Harrisburg Area Community College. She chose nursing because at age 11, her grandfather was suffering from a long illness. After 6 months he was diagnosed with throat cancer. “Over the months as he was battling the disease he had wonderful caregivers.”

Now with Mildred’s arrival, Esther said it was “the best thing that has happened to me. After ten years of being alone in America I have a family member with me.”