In the late 1950s, as teenagers we always joked how Doylestown was a ‘hick town’, especially 9:00 at night when you could lay down on the middle of Main Street between Oakland Avenue and State Street—and not get run over by a car. I never tried it. Maybe some did.

This incident of graffiti as noted in the title occurred when the 1877 Court House was in the midst of demolition to make way for the current County Administration Building and Court Rotunda.

One actor has been interviewed but there is another (and possibly more) who took part in this episode where they painted a message across the construction fence that surrounded the demolition site. 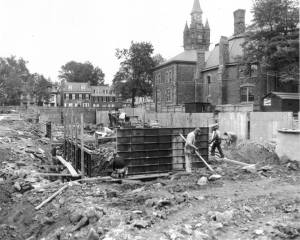 My search continues for the photograph showing that message of indignant sorrow for the loss of our beautiful old Court House. It’s an integral part of Graffiti on East Court Street. The image at left was also taken in 1958. The clock tower with the spirals on the four sides was a signature feature seen in many of the structures designed by Addison Hutton.