Back in the day, growing up in Doylestown and attending Central Bucks High School, our classrooms had a reputation of being sanctuaries for learning Civics: The three branches of government, the cabinet names and the importance of presidential elections. At each cycle of the presidential election, one of those now extinct-dependable lever voting machines was rolled into the lobby where  we experienced civic responsibility by voting for our choice.

While there has been recurring news coverage of physical and verbal confrontations between anti-Trump and pro-Trump supporters, our main stream media has failed to report on how this presidential election has affected students in our nation’s schools, from Kindergarten through 12th Grade.

Several days ago a special 16 page report from SPLC’s Teaching Tolerance landed in my mailbox. On the cover is an angry image of the presumptive Republican presidential nominee, captured in one of his all too familiar moments with his mouth contorted into a mercurial circle.  I can almost hear the hurtful, divisive and racist statements spewing from his lips. 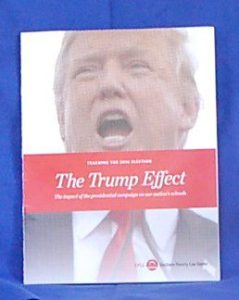 Compiled by Teaching Tolerance Director Maureen B. Costello, the report is an insightful  exmination of the impact of how the 2016 presidential campaign is affecting students in our nation’s schools. It summarizes the opinions from a survey completed by nearly 2,000 educators from across America. Their responses were  accompanied with over 5,000 comments. More information about this survey with the  questions asked is available online at splcenter.org/trump-effect.

In Costello’s Introduction, she writes how immigrant students or children of immigrants and Muslims “… expressed concerns or fears about what might happen to them or their families after the election.”  This national increase in uncivil political discourse and anti-Muslim or anti-immigrant sentiment has become a concern to teachers.

Most sadly, “… 40%” of teachers were hesitant to teach about the election. The report is then broken down into two categories: Impact on Students and Impact on Teaching. Various instances of teachers’ responses described how students were “terrified” that the outcome would change their lives.  Beyond immigrants and children of immigrants, these students included Muslims, African Americans and children of color. Although their ancestors arrived here as slaves before the American Revolution, African-American students were fearful that they would be deported back to Africa.

Here are two quotes from teachers lifted from Impact on Students:

My fifth-graders got in a fist fight on the playground yesterday … when one of the boys quoted Donald Trump.”

“… ‘dirty Mexican’ has become a common insult. Before… it was never heard.”

The other section, Impact on Teachers overflows with comments ranging from frustration to disappointment to hope to determined responsibility. Teachers are between a rock and a hard place as they tiptoe in the classrooms each time students voice their preferences for a presidential candidate. Many teachers expressed how pleased they were to see their students engaged in research and writing about the primary system and the candidates. Although some teachers have stayed neutral still others chose to stay completely away from this time honored Civics lesson. Even then one teacher wrote:

“I have thrown caution into the wind and have spoken out against certain candidates which I have NEVER done …but I feel it’s my duty to speak out against ignorance!”

Since the inception of SPLC’s program Teaching Tolerance, its mission of promoting peace and diversity instead of bullying and racism was a classroom success.  A teacher in Edmonds, Washington commented that for his students this election ” … stands out for modeling the worst kind of behavior … I hope they don’t walk away thinking this is what politics is all about.”

Hillary Clinton and Donald Trump are the chosen presumptive presidential nominees. I wonder… Just what conversations are  happening inside the homes where the youth of our next generation live? School will soon be out for the summer … What will happen on our playgrounds or at local swimming pools or on the fields of competition?