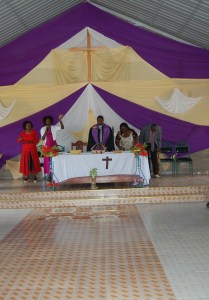 Sunday, February 22, 2015:  A bright and warm Sunday morning greets us. The cold white-snow winter back in America is nowhere to be felt here. I take the short walk across the compound with my plastic tub to be filled with warm water for the morning ritual of a “bird bath”. This is a small inconvenience compared to turning a spigot for water to flow from faucets or shower nozzles. It’s impossible to imagine not bathing at all because the water from a 5-gallon container is not clean and is used sparingly for cooking and drinking. Now bore holes from seven wells carry water through pipelines to cisterns placed throughout the village.

“Before the wells it was a struggle to find water every day. Now I can bathe and wash my clothes with clean water”, so we hear a few days later from a Maasai woman.

This will be the only opportunity for me to wear my Maasai dress with its colorful beads and metal discs that make a gentle tinkling sound when I walk. Phyllis and Alice also are dressed in their finest Maasai garb.

The denominational church prevalent throughout Kenya is the Presbyterian Church of East Africa (PCEA). In 2009 I attended a PCEA church service. This visit I’ll be worshipping at a different PCEA church, one located on the grounds of the Olosho Oibor Primary School. It was in 2009 that I photographed over half a dozen children at this primary school, children sponsored by donors from the Delaware Valley. The school now has a cooking hut which feeds lunches to the children. This is a godsend because for many children, having a meal at lunch means they’re able to attend school. An infirmary is also on these grounds. Next to it is a maternity building where up to six women can stay prior to the delivery of their babies.

Genital Mutilation). Even though the Kenyan government recently passed a law forbidding FGM, it still continues in some communities. At right are some of the girls from the safe house dancing and singing at the service in their tangerine and black “Weekend Uniforms”. There are currently 60 girls living in this sanctuary. I will in a later post write a separate blog about the history of the safe house.

Church begins at 10 a.m., a service that mixes traditional Maasai music and dance with Christian Bible readings, music and prayers. As guests, we are invited to introduce ourselves to the congregation and describe our relationship to MCEP.  Toward the end of the four-hour service everyone in the congregation rises from their seats for a delightful Massai dance and chant down the center aisle. I start my movie camera and hope I’ve captured a moment to be treasured.

After the church service the documentary QUENCH is shown to everyone. Many of the young people under ten years of age watching the documentary this morning have no conception of walking 7 to 10 miles every day to fetch water. Daniel Salau Rogei, Program Assistant for SIMOO speaks after the film and encourages the young people to continue the legacy of their Maasai culture.