Saurday, February 21, 2015:  We have an hour’s ride from Nairobi before arriving at midnight to the compound of Susan Naserian and Francis ole Sakuda. There is no light pollution and standing out in the dark night, it’s overwhelming to see hundreds of stars, so bright and close enough to touch. The Big Dipper sits low in the southwest sky, ten times bigger than it appears in Doylestown.

Francis and Susan will host us during our stay. Both of them have traveled to Bucks County at different times over the past nine years to participate in our cultural exchange programs at schools, organizations and houses of worship. Francis is the Director of SIMOO, the Non-Governmental Organization (NGO) that manages the donations MCEP sends to this Maasai community for education, water and women’s projects. In previous years at separate times each of us—Phyllis, Alice and I—traveled to Kenya and stayed in this compound. There is no plumbing but electricity from solar energy is available to light our rooms in the evening hours. That being noted, we’re thrilled to be back in Maasai land!

The compound is surrounded by a barrier assembled from the thorny branches of the acacia tree. This keeps out wildlife. Francis has two separate fenced areas inside the compound for his cattle and goats. Almost every night during our stay the dogs wake us from barking at wildlife on the other side of the barrier—usually it is hyenas trying to get to the cattle or goats. 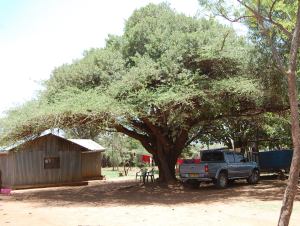 There are six separate structures inside the compound: A guest house where we stay; the herder’s house; a small corrugated metal “cooking room”; the manyatta where Susan and Francis sleep along with a separate room to relax and take our meals (pictured at left); a second manyatta with two separated rooms, one where Susan’s helper Veronica stays. The other room is where Susan and Francis’ two sons (Amos and Ezekiel) stay when they are home from school. The sixth building, constructed on a concrete floor is the pit toilet with a separate drain for “bird baths.”

On Saturday morning we travel into Ngong Hills to email family of our safe arrival and take a stroll through the market, so busy it puts Rice’s Market to 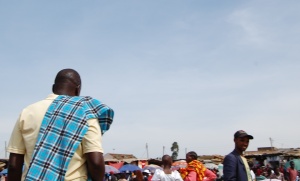 shame: Vendors’ blankets piled with goods for sale, blankets so close together they overlap on all sides. We gingerly step over and around blankets that are piled with goods including shoes, clothes, pots, pans, utensils, fresh vegetables, brooms, dried beans, music videos, miniature propane cooking stoves and more shoes and more clothes. Taking photos is not allowed. I hug my camera to my waist as I try to snap one. Doesn’t work—The picture above captures just the heads of vendors and buyers. Then some observant man yells at me—“No pictures! No pictures!” So much for being sneaky.

Tomorrow is Sunday and we go to church. And I’ll share a weather report.