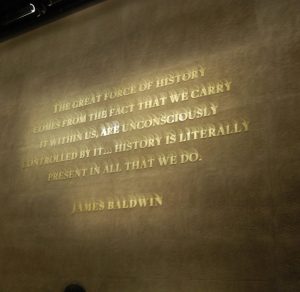 “The great force of history comes from the fact that we carry it within us, are unconsciously controlled by it … History is literally present in all that we do.”  James Baldwin — 8/2/1924 to 12/1/1987

It’s after 7 a.m. on Saturday May 23 when my sister Judith and I travel with my niece Leigh, from her home in Olney, Maryland. We are on our way to witness the celebratory opening of the National Museum of African American History and Culture (NMAAHC), that documents my ancestors’ struggle to Freedom. The words of James Baldwin, one of our most prolific Black writers of the 20th Century are engraved inside the museum, capturing the essence of the African American experience. His words and those of other men and women Black writers are spoken by Oprah Winfrey and Will Smith during a poetry slam that thrilled everyone of us.

The National Museum of African American History and Culture

David Adyaye of Ghanain-British heritage, is the 50 year-old architect and lead designer of the museum.

In an interview published in the September 26, 2016 edition of “The Last Magazine”, he describes his   concept ” … to express history that began with enslavement and moved, slowly towards freedom.” It was a Yoruba sculpture that embraced  his vision  of “… a two-tiered, crown-like structure … open to the sky, riddled with sunlight.” 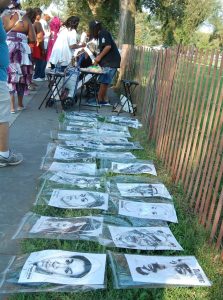 It’s near 8:30 when we arrive in DC and walk the several blocks along 17th Street before entering into the public viewing area. Hawkers are setting up on the sidewalks to sell their wares of T-shirts, buttons, caps and even sketches of Black Lives lost, from Trayvon Martin to Terence Crutcher. Now inside the Mall’s expansive grounds we scope out a spot, plant our feet and for the next 4 hours don’t move until its over. The crowds of mostly African Americans also include Caucasians and Asians. Numerous people are wearing African garb while elsewhere Black Lives Matter T-shirts and logos from colleges and universities near and far cover the backs of others.

The FREEDOM SOUNDS program of music and poetry share the day with remarks from Smithsonian Museum representatives including founding director Lonnie G. Bunch III, Civil Rights icon Congressman John Lewis, prominent entertainers and former President George W. Bush who signed the legislation to build this museum. When President Obama reaches the podium everybody stands and shouts and cell phone cameras rise in the air. Lots of love is given to the most popular President in decades.

Our President. I will miss him. His remarks were a love song for America

“This is the place to understand how protest and love of country don’t merely coexist but inform each other…hopefully this museum can help us talk to each other … listen to each other … see each other. Black and White and Latino and Native American and Asian America.” — from remarks by President Barack Obama

In the belly of the museum, 70 feet below ground is the somber chronicle that begins in the 15th Century when Europeans invade the Motherland. Then the diaspora across the sea from Africa to countries around the globe. The Colonial America experience of the plantation with beatings and family separations are enhanced by a collection of valuable artifacts in displays of photographs, yellowed letters and shackles authenticating the treatment of human beings as if they were livestock.

As we journey upward through the different levels we see the rising of the African American: The Civil rights Act–the movement toward the push for equality. We are treated to the accomplishments of Blacks in the arts, entertainment, athletics, government and education.

At its highest level, the vision of David Adyaye is realized. Light flows throughout rooms where paintings and sculptures by African American artists fill each of the galleries.

It is a powerful experience and I encourage every race, color or creed, the young and old, and the rich and poor to visit this museum. Timed entries to the museum are booked through January 2017 but there may still  be  some available open slots. Go to their website at NMAAHC.SI.EDU.

I’m returning next year for a second visit. One visit is not enough.

One thought on “A love song to America”